High Lunch with a Twist in the Sunshine Coast Hinterland

We have been busy creating and cannot wait to have you with us as we develop a new take on
an old favourite with our talented team of chefs!

High Tea at Flaxton Gardens offers glorious views of the whole Sunshine Coast Hinterland and is an experience not to be missed for special occasions or a long overdue catch up with friends and family.

We've added a modern twist to the traditional style high tea,
working with our unique Sunshine Coast flavours and special serving touches.
The selections may change occasionally as we source local produce and develop new taste sensations.
Try our local cheeses or our smokey BBQ delights that we hand smoke on-site for that original flavour.

High tea celebrations are perfect for groups and most popular for baby showers, pre-wedding events and birthdays.
Or an elegant morning tea in the Sunshine Coast Hinterland with our sumptuous set-up throughout the venue, lawns and gardens depending on the season, taking in the views of the Sunshine Coast coastline.
We have 2 sittings - at 10.30am and then again at 1.00pm
Sittings are for 2 hours Wednesday to Sunday

Flaxton High Cheese $50
A local cheese delight with all the accompaniments for the cheese lover!

Please call to check on our menu of the day and available space as we come out of restrictions on 5445 7450
Pre-order and pre-pay essential for your High Tea event so our chefs can source your local produce
and we are ready for you on arrival to completely enjoy at a distance.

Celebrate at fully laid tables with  Tiffany chairs and centrepieces to create the perfect atmosphere for your special event.
Your luxurious seating area also includes a gift table should you be celebrating a Baby Shower High Tea or a Hen's High Tea.

(Must be booked in advance - please advise dietary needs on booking)
Our High Tea Menu is subject to change. 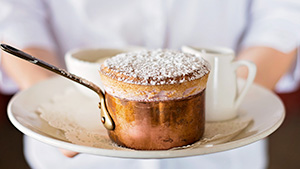 BOOKING ENQUIRY
What an amazing place. Beautiful views, gorgeous food. My partner and I had high tea and it was divine. Very friendly and professional staff. We got engaged whilst there. I highly recommend Flaxton Gardens, it's absolutely beautiful.
Darren Hacche Stockmeier - Facebook Review
I had a high tea at Flaxton gardens yesterday to celebrate my 60th birthday and absolutely loved it! The staff are all so lovely and very helpful, the high tea was delicious and the setting is just beautiful!
Vicki Bell - Facebook Review

The British tradition of Afternoon Tea was thought to have been introduced in the 1840’s by Anna, the 7th Duchess of Bedford who was said to have complained of “having that sinking feeling” during the late afternoon. At the time it was usual for people to take only two main meals a day – a large breakfast, and dinner at around 8pm in the evening. The solution for the Duchess was a pot a tea and a light snack of bread and butter or cake, taken privately in her boudoir during the afternoon. Once the Duchess began inviting friends to join her for Afternoon Tea, it became a popular social event amongst the English aristocracy.
Traditionally, the upper classes would serve a ‘low’ or ‘afternoon’ tea served on a lounge or low table between four and five o’clock, whereas the middle and lower classes would have a more substantial ‘high’ tea later in the day, between five and six o’clock, in place of a late dinner. The names are derived from the height of the tables on which the meals are served, high tea being served at the dinner table. In more recent years, the term ‘high tea’ evolved to became a word meaning exquisite afternoon tea. 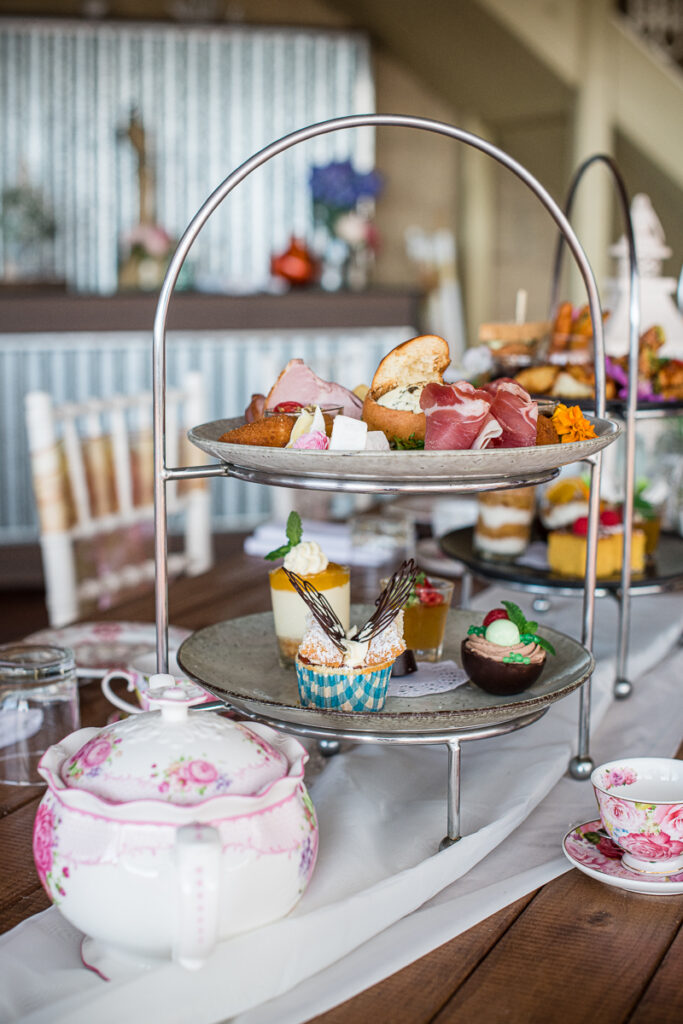 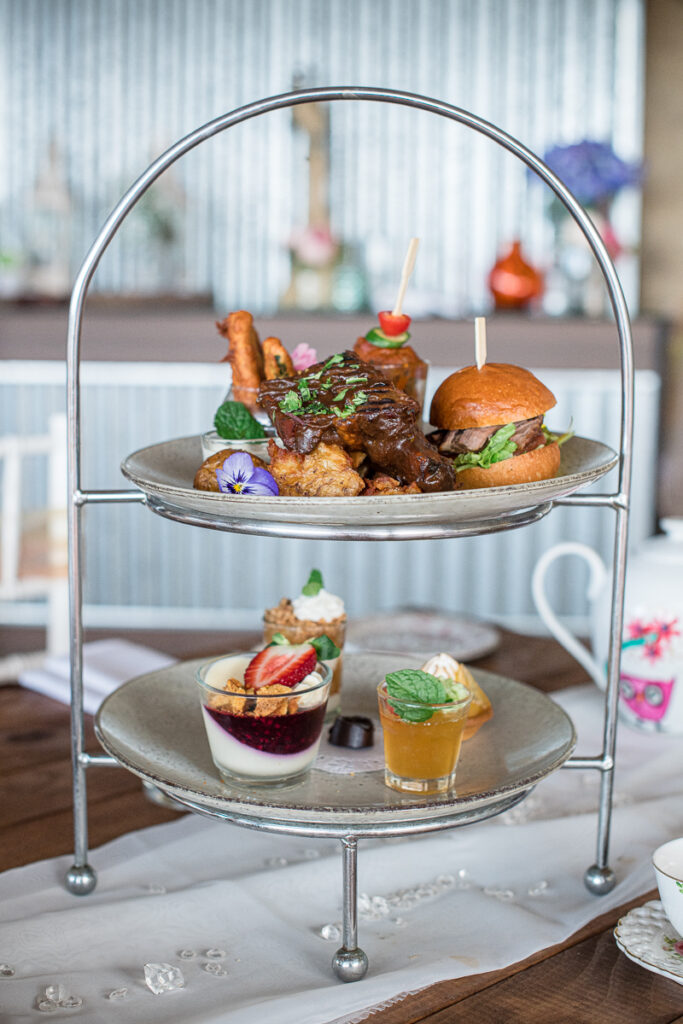 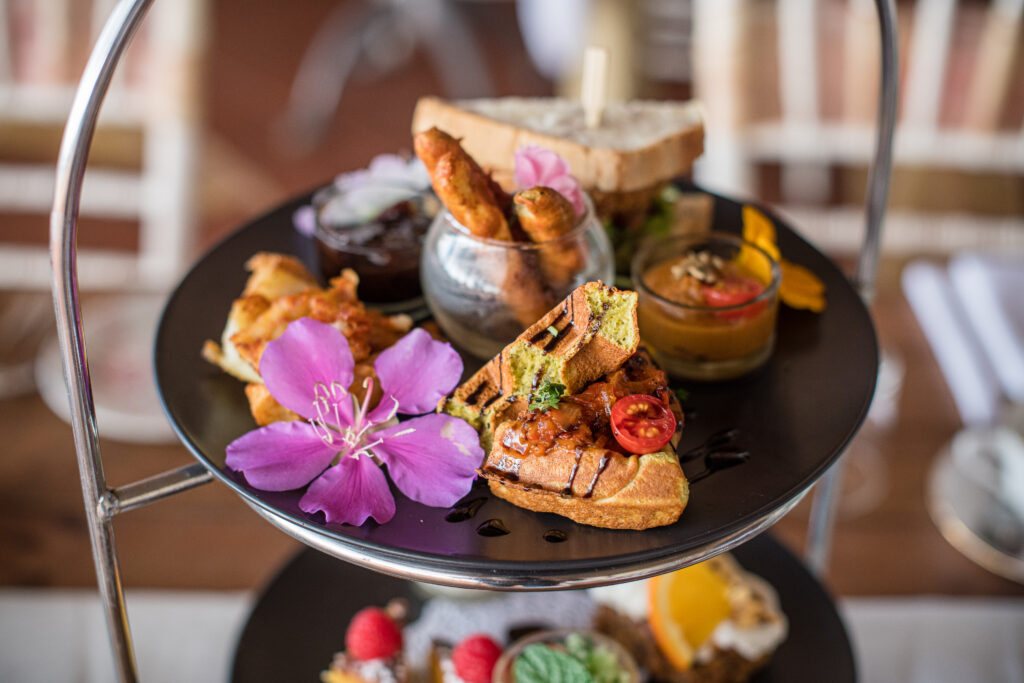 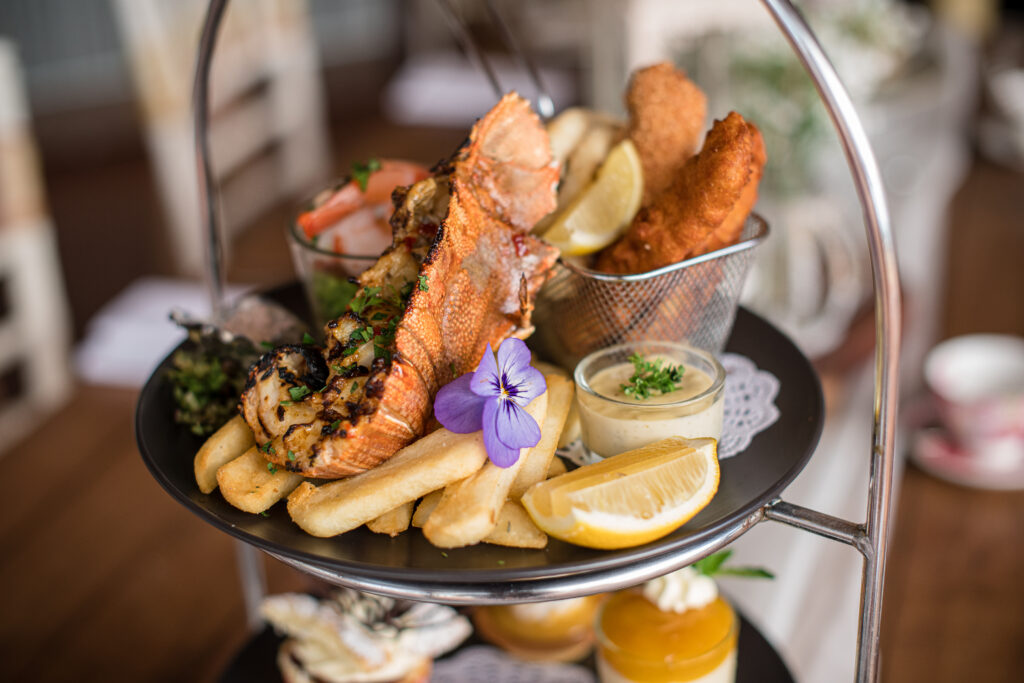 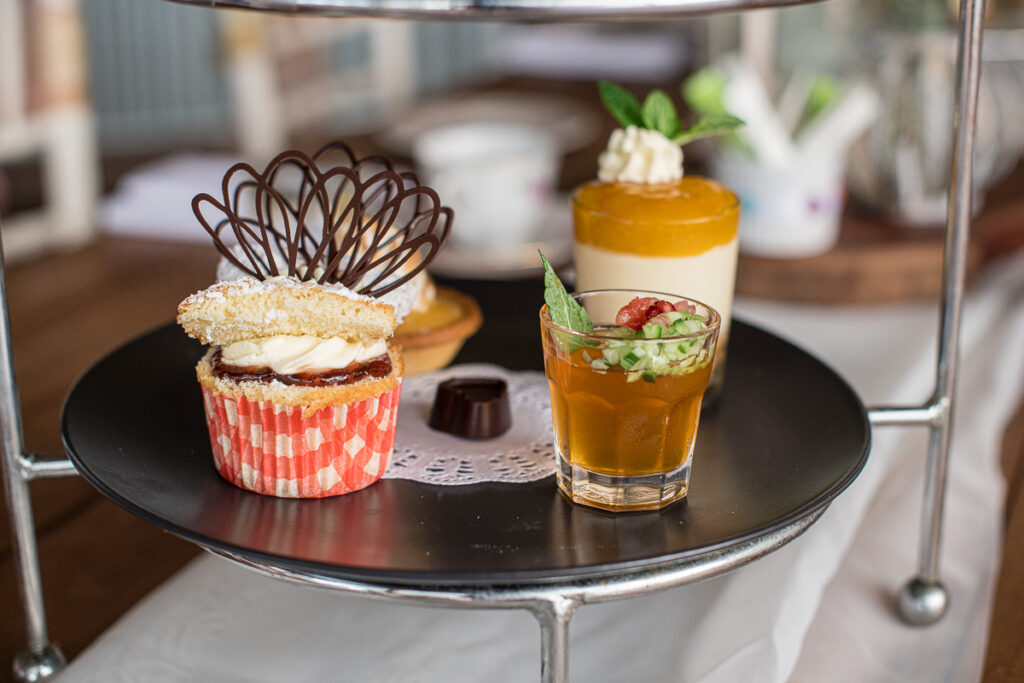 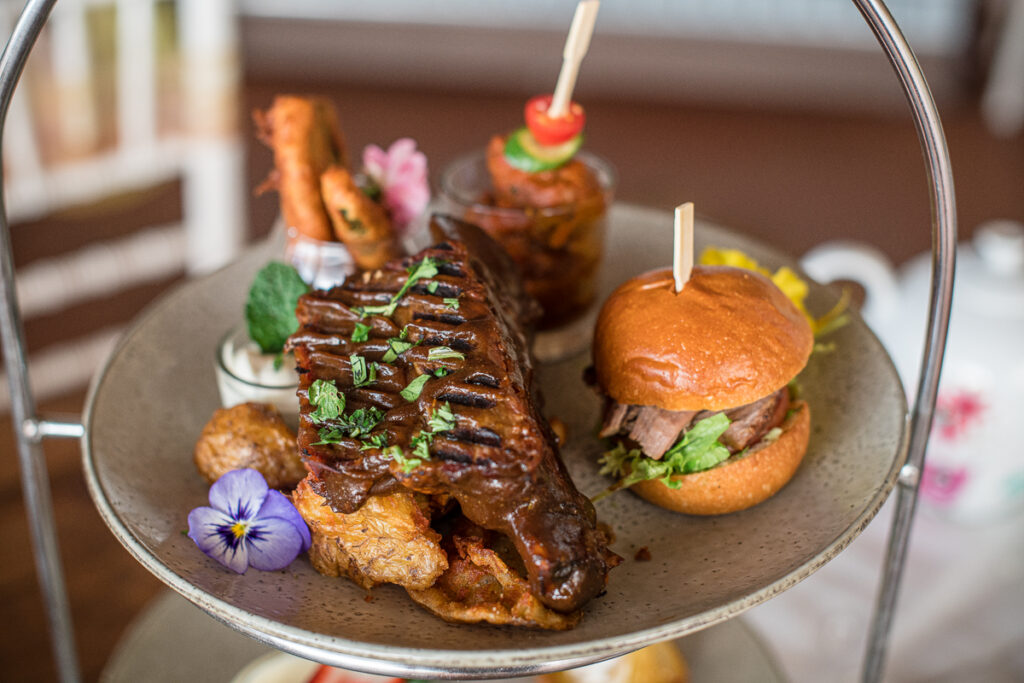 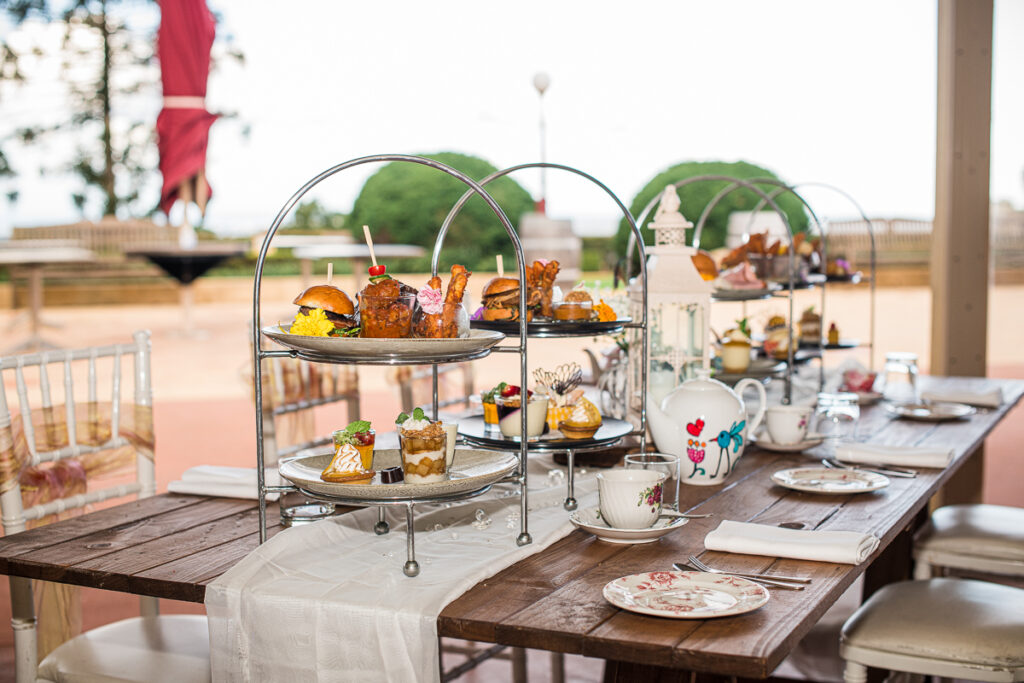 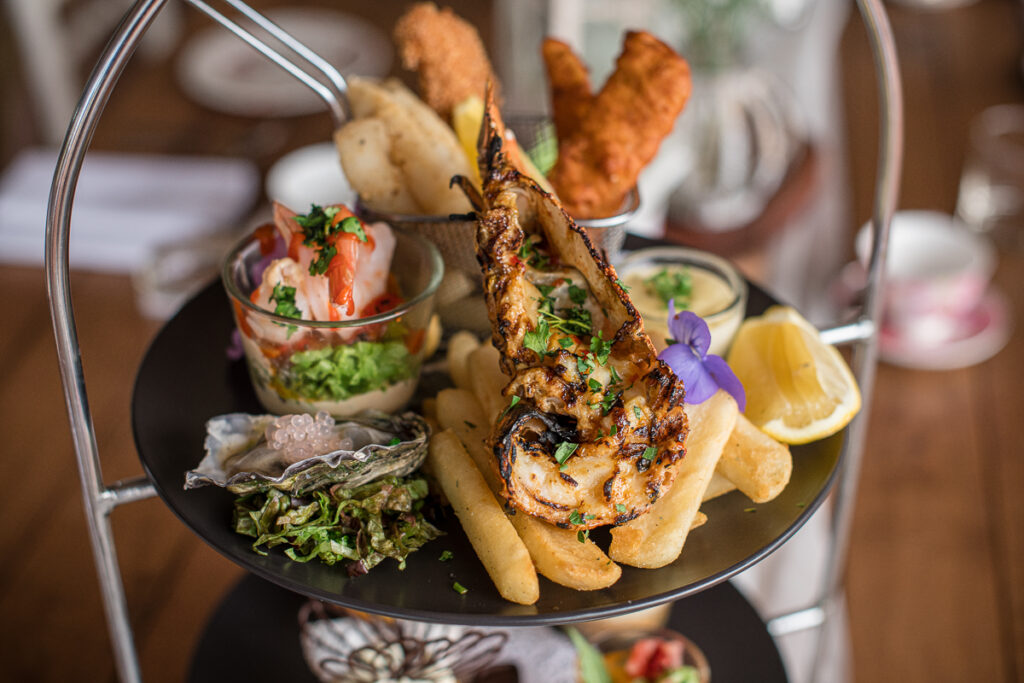 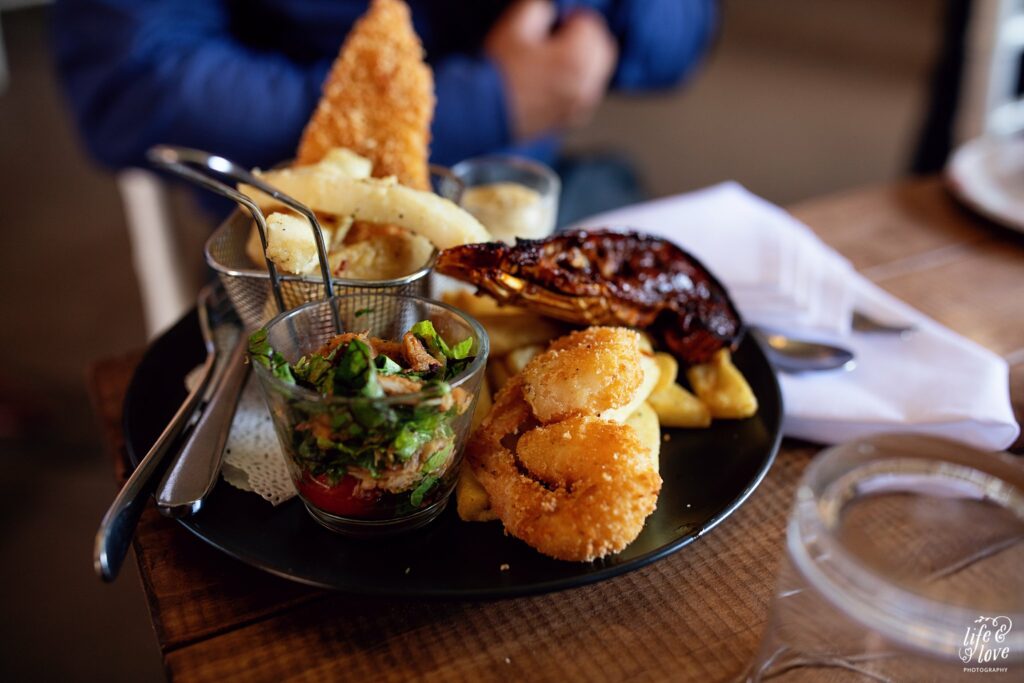 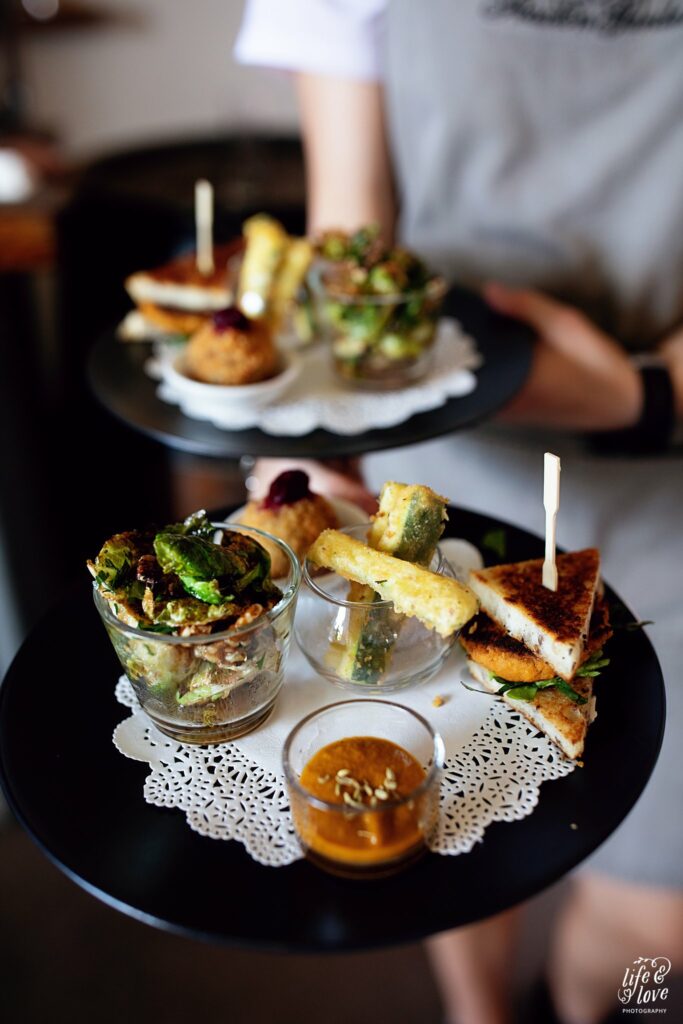 Book your next High Tea Celebration at Flaxton Gardens